Staring down the male gaze, or: Looking at looking at women in popular culture

Secondly, only the first part of this post will focus on the treatment of female characters by Supernatural. The rest of the post will consist of my more general reactions to the finale.

My sketchy, SPOILERY reactions to the Season 8 finale, “Sacrifice,” are after the cut:

For the purposes of this blog, the following bit of dialogue is the most important exchange in the latest episode, if not in the series as a whole:

Castiel: What was he like?
Metatron: Who? God? Well pretty much like you’d expect. Larger than life. Gruff. Bit of a sexist. But fair! Eminently fair.

God is a sexist.

Metatron, you just explained . . . everything. “Of course our show is sexist! The capital-G God of the show’s universe is sexist!”

Supernatural just literally wrote itself a free pass for all of its sexism, past and future, and the rest of us can go sit in a corner and deal.

Of course, another possible–and much more generous–interpretation of this conversation is as a self-aware admission of how much sexism has been in the series so far, and perhaps an implied promise that SPN will try to treat its female characters better next season. (Just because God is sexist doesn’t mean the show has to be, after all.)

But we’re not at Season 9 yet, so let’s look at what happens to all three of our recurring female characters in “Sacrifice.”

Sheriff Jody Mills (played by Kim Rhodes) goes on a blind date with Crowley. Apparently, they met online. Crowley curses her with a hex bag. Jody spends the first half of her screen time all a-flutter over how hot Crowley is and the second half coughing up blood in the ladies’ room. Crowley uses her as leverage to get the boys to agree to a surrender/tablet exchange. (But no worries! In a move that surprises absolutely no one, pesky Moose and Squirrel double-cross him later.) Jody probably survives, but the episode doesn’t check in on her after the coughing-blood incident and we never actually see her recover from it. Hopefully she will prove her continued existence in the next season.

The smile Jody gives Crowley when she realizes how sensitive he is. Until the attempted murder, this is a pretty good first date.

By the time Abaddon makes her appearance in “Sacrifice,” she has already been shot with a devil’s-trap-inscribed bullet, cut up alive into little “steaks” (Dean’s word choice, not mine. Ew, Dean.), buried alive under cement, dug up from under cement (Did Sam and Dean have to drill through cement to retrieve her? And why was she so clean when they dug her up? Even though her little steaks were in little boxes, one would think those steaks would be bloodier or dustier or something.) and sewn back together with the Winchesters’ old army field surgeon’s kit. And she was only in two other episodes. In “Sacrifice,” she gets immolated. Having removed the magic bullet that kept her bound to her vessel in the previous episode, she just smokes out, and the only casualty is her Alaina Huffman-shaped meat suit. Who knows who she’ll be wearing next? 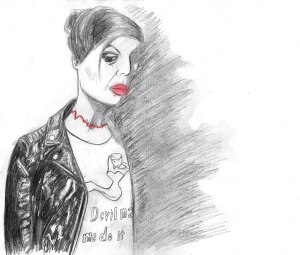 Abaddon’s spiffy outfit somehow did not get slashed to bits when Dean minced her. Wait. Does that mean that Dean undressed Abaddon before the slice and dice? Ew again, Dean. I can never un-know that.

Huffman’s fellow Stargate alum, Amanda Tapping, has had a slightly more prominent role in Season 8 as the angelic Naomi, who has been mind-controlling Castiel (and a bunch of other angels) by drilling into their brains in her white dentist’s office located somewhere in Heaven. (OK, so it’s not a dentist’s office. But it’s white and has that whole antiseptic feel. And the reclining chair. And the drill. Actually, it is totally a dentist’s office.) And Naomi gets drilled through the skull with her own drill. She is presumably more dead than Abaddon, but I didn’t see any wing-shaped scorch marks, so I’m withholding judgment.

Naomi undergoes a brief redemption arc in the season finale . . . and only just in time, too.

And those were the only three recurring female characters in the episode. Things did not go well for them.

Other Women in the Episode

The episode also has a female cupid. She seems nice enough. And she gives up her bow without a fuss (bad call in retrospect, but that’s what you get for trusting people). It is, however, strongly implied that Castiel has to cut the bow (which appears as a small bow-shaped symbol on her palm) out of her hand with his angel blade. So, yeah, she probably ends the episode injured, at least. The camera just cuts away before the bloody part.

Honorable Mention Ignoble Ends for Women in the episode go to:

1) Josie. For those of you who do not recall, Josie is the woman Abaddon is possessing. The show is a bit murky on how demonic possessions work, and when exactly demonic vessels die from mortal wounds that should kill humans, but don’t kill the demons who keep their bodies animated. Hopefully Josie’s consciousness had already passed on before her body was shot, beheaded, cut into small pieces, buried, sewn together and burned in holy fire. Because in Season 4 we were told that demons could take a back seat to their meat-suit’s consciousnesses if they wanted to, and when Dean cut Abaddon/Josie up, that was seriously all I could think about.

2) The unnamed woman Naomi is possessing. We know nothing about her! Except that she must have at some point said “yes” to Naomi. That, and how she dies. This show and its characters are frighteningly accepting of the murder of human hosts.

Now, the rest of this post isn’t really about representations of women, because a lot of the episode did not revolve around–or even involve–women. In spite of the fact that both Abaddon and Naomi were built up to be major players before the finale aired. A problem in its own right? Perhaps.

No male characters were killed in the making of this finale. Wow. That is weird.

Of course, Sam suffers a backlash from the Hell trials, Crowley gets kidnapped and then has a close encounter with Abaddon, Cas gets kidnapped and has his grace stolen, and even Kevin gets manhandled by Castiel a little bit, so they’re not exactly sitting pretty. Dean, for his part, has his hands full just worrying about everyone else.

And Metatron comes out unscathed!

General Thoughts on the Episode as a Whole

Overall, as a fan, I quite liked the episode. It had good pacing, it had brotherly bonding, and it had Castiel fucking up like he hasn’t since the Season 6 finale/Season 7 premiere.

OK, so, as a side note: if I were an angel in this universe, I think at this point I would just beg Castiel to sit in an empty room somewhere and not touch anything ever again. As far as his relationship to Heaven goes, Cas functions like a really, really powerful cursed object.

One of the things that I really admire about Supernatural is that it allows its characters to make mistakes. Big mistakes, with big consequences. And then those same characters have to go out and take responsibility for all the crap they pulled (usually in the previous season). A lot of the series, really, is just characters cleaning up their own messes. And I love that. And it looks like Team Free Will is going to have to play swiffer sweeper upper like their lives depend on it (because they will) when the series returns next Fall.

At the end of the episode, angels are falling. There is a CGI close-up of an angel falling, and it looks like he is being separated from his wings. So, is it just his wings he’s losing? Are all the angels still angels, just grounded and flightless so they can’t get back to Heaven? Or are they losing their grace as well? Will all the angels be mortal now? Or did he get to keep his wings, and that’s just what angels look like plummeting through earth’s atmosphere?

And what happens to all the angels who do not already have vessels? Or do they all just happen to have vessels by now? Are there angels falling in pure angelic form who are going to need emergency vessels? (Because, honestly, that could be a pretty cool episode in and of itself.) Or will vessel-less angels get shunted into the nearest healthy womb, and have to be born like Anna was after she fell? Will there be a rash of immaculate conceptions? The way angelic vessels function is one of those things that has been pretty inconsistently explained throughout the series.

Metatron slits Castiel’s throat and pulls Castiel’s grace out through the open wound, before healing him and sending him back to Earth. Is this a clever ploy by the writers to give Misha Collins a chance to use his regular speaking voice as (fallen!) Castiel in Season 9, thereby protecting his much-abused vocal cords? Having one’s throat slit–not too mention all of one’s celestial power forcibly removed, via said slit throat–might change a person’s speaking voice. And if there were ever a time to make the switch, it’s now. I, like all of Castiel’s fans, would be sad about this decision (to an unreasonable and probably unhealthy degree), because I absolutely love Castiel’s voice as-is. But I would understand. Vocal cords are important to actors, I hear.

I also have some other questions. Questions I probably share with most if not all of my fellow SPN fans:

1) How healed is Crowley, exactly? Can the boys get someone else to finish the ritual, or is it a bust since Sam started it but couldn’t complete it himself? Can Dean or somebody start the ritual over again, or does doing the first part twice muck up the recipe? If no one completes the ritual, what does Crowley become then?

2) How damaged is Sam, exactly? If he performs any demon-curing ritual ever again, will he automatically seal the gates of Hell and drop down dead, or would he have to restart the trials from square one for that to happen? Will Sam never be able to cure a demon, even though it’s a useful skill they only just learned? Dean’s job now, I guess.

3) Kevin looked all packed to leave before all the alarms we didn’t know about in the bunker went off. Where was he going?

4) How technologically advanced is that 1950s bunker, anyway? And how did all of its machines stay in such good repair?

5) Will Dean get to play mother hen to a wounded brother, a fallen angel, a not-quite-cured demon and a terrified prophet when they all set up house together in the Men of Letters bunker in Season 9? I certainly hope so. That’s a superhero team waiting to happen.

6) Is Naomi really dead? Is it possible to care about whether or not Naomi is really dead, when she was never given the time to develop as a character, and turned out to be a pretty ineffectual Big Bad who repented of her ways at the last minute only to be replaced by an even bigger–and, um, maler–Big Bad? (Hey, Naomi is kind of the narrative equivalent of Professor Walsh in Buffy Season 4. Only with more redemption.)

6b) Are female Baddies on this show forever destined to be upstaged by their stronger male counterparts?

I’ve tried to predict Supernatural seasons before, and I’ve generally gotten things wrong. (Which is fine. Great, even! It’s nice to be surprised.) I’m sticking with open-ended questions for now, not least because the Season 8 finale left us with a big old yarn-ball of mysteries that will have to be untangled at some later date.

3 Comments to “Supernatural vs. Women: Some thoughts on the Supernatural Season 8 Finale”